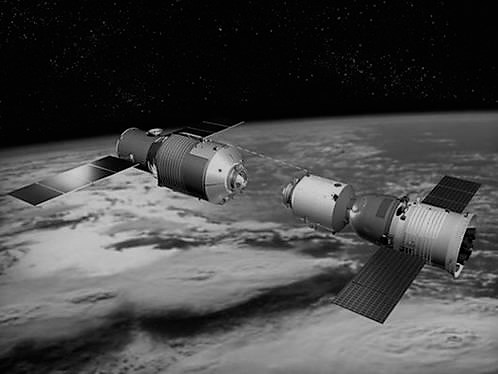 Two astronauts isolated on a spaceship orbiting a moon are given the opportunity to have sexual relations with whatever objects of their imagination they desire most.

Having piloted the SS Tiberius successfully from Earth to Jupiter’s moon of Europa, Captain Christine Lister sips a brandy and contemplates her mission of dumping interstellar toxic waste on its surface, returning to Earth, and a probable promotion. Upon retiring to her quarters she is stunned to come face to face with the physical representation of Andrei, her one true love from her pre-Space Corps days. Before she can work out why he has materialised into her bedroom, her first mate, Kelvin, arrives, out of breath, both from responding to her cries of alarm and from near-permanent sexual ecstasy with his own object of desire, Harriet Trance (older sister of an old schoolmate) who also appeared before him as he drank to celebrate their arrival at Europa. Having deduced that some sort of power within the moon itself has generated these recreations of lust for the crew of Tiberius, Kelvin suggests they kick them into the airlock and get on with their mission. but he says this as someone who has already grown tried of his manufactured sexual plaything, whereas Chris is too busy being lovestruck by the recent presence of Andrei to hear his sensible words of advice.

My wife had just given birth to our first child and in those first few weeks of fatherhood I worried that I would never have time to write another thing. Instead of writing, I took up watching – most of the stored content on our recorder box, with baby daughter positioned sleepily over my shoulder. I found myself able to get through obscure subtitled film after obscure subtitled film, though often via numerous ten to twenty minute segments. And so it came to pass that I finally got around to the 1970s Soviet version of Solaris that had been sitting patiently on the box for around 18 months. Given that it clocked in at around three hours, I lost count of the number of babysittings during which I viewed it. But, had I watched it as originally intended – drunk and tired after a week of work and an evening of creative writing – I’d probably have forgotten most of the important details by the following morning. In sobriety, and with time to think between each sitting, the plot of the film got more and more into my mind, until by about the eleventh, twelfth or thirteenth sitting, I’d decided I wanted to take the basic theme and adapt it into a play. You see, Polish sci-fi author, Stanlislaw Lem, was scathing of the film adaptation of his novel, and complained that he did not write it about people’s “erotic problems in space.” This was too good an opportunity to pass up and I gleefully brought Lem’s nightmare to life. Furthermore, my father has read more science fiction books than any other humanoid in the galaxy, so he was a wealthy source of info.

1. Sex sells, and I don’t think I need to say too much more than that.

2. Features a strong female lead who doesn’t take any crap from the boys.

3. Many people would be very interested to be alone (or almost alone) with the person they desire most in the world.

6. Provides an entry-level role for a new actor by virtue of a significant character only required for off-stage speaking.

8. Huge amounts of fun had taking tried-and-tested sci-fi props / concepts and putting my own spin on them.