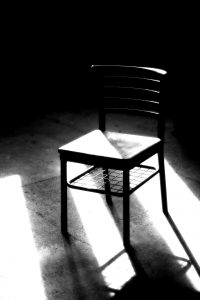 Liam Baines believes he is to be interviewed for a job by complete strangers – he is wrong on both counts.

A young man in his late 20s, recently out of work, but keen to succeed, turns up to an interview in a near-deserted office block. Braving the usual pre-interview nerves, he completes the form given to him by the Head of Personnel and tries not to notice how intrusive and overly-personal the questions appear to be. As the interview gets going, the newly-arrived panel claim to be experimenting with an innovative and academic approach to asking the questions, but as far as the candidate can tell they become more irrelevant each time, especially when at one point the panel breaks off to take refreshments before he can even provide an answer. Things become more bizarre by the minute and at the point of being asked to provide his bank details, the candidate suspects something is very much afoot. Once the identity of the mystery fourth interviewer (who turned up halfway through) is revealed,  he is forced into a head-on confrontation with his painful past in which the weaknesses that he did so well to cover up for most of the interview are made public in all of their embarrassing and highly personal glory.

A Suitable Candidate was written immediately following a job interview for which I was unsuccessful. Disappointed with what I felt were some largely irrelevant, almost bizarre questions in relation to the role I was applying for, I chose to take the premise and lampoon it to my heart’s content. Using the interview set up as the foundation, the play developed into an offbeat study of various issues caused by sex, love and, err, lollipops. Although I am well over my original disappointment, and I did at least get a play out of it, I dedicate A Suitable Candidate to anyone else who has ever been unsuccessful at interview.

1. As is stated above, everyone has been through an interview at some point, and everyone knows what the pressure’s like, and therefore everyone can identify with the main character’s plight.

2. Sex sells. Maybe not in this way, but frank discussions about sex lives always raise a giggle.

3. No real stage props needed, bar some tables and chairs, and at least one lollipop.

4. Sexuality of all kinds is represented (without getting too kinky or weird or off-putting).

5. Gives the audience an incentive to see just how they would answer some of the awkward interview questions.

6. Anyone stuck in office life (and that’s a lot of us) can identify (and dare I say laugh) at the concepts.

7. Characters not appearing what they seem is always a good draw and this play features all but one of them doing just this.

8. There are some young(ish) people in this, and young people are cool and trendy – youngish people are a bit cool and a bit trendy, so that’s okay too.

10. This play features relationships, breaking up, and getting back together…and we like that sort of stuff, don’t we?