The Kindness of Strangers, Learners and White Van Men 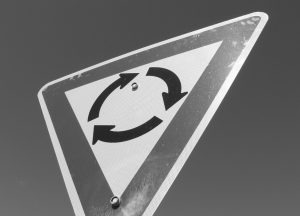 In the long, hot summer of 1995 a couple of young new age travellers take over an elderly vagrant’s former campsite in the centre of a busy roundabout.

Two young squatters are convinced by their wheeler-dealer friend to take over a deceased vagrant’s camp in the centre of a busy roundabout and, as long as they look after his gear, they can use what they need. The camp is soon converted into an “island paradise” featuring (mostly) all mod cons, even though some of the gear looks suspiciously brand new, and their behaviour attracts a warning from the local council and a curse from a visiting Hindu priest. The couple make money by storing some of the gear on the edge of the roundabout and passing it off as art, much to the pleasure of passing motorists, but their island paradise becomes a warzone when heavy traffic jams lead to road rage incidents. When a fatal crash is indirectly blamed on the squatters, they suffer revenge attacks from the relatives of those involved and fall out with everyone they know, including their wheeler-dealer. Ultimately the young couple have to decide whether to stick it out and keep on going round their roundabout paradise, or call an end to their great artistic experiment and get back on the road to an uncertain (but hopefully safer) future.

1. Besides having to stage a traffic jam, the budget would be minimal.

2. A unique situation – I can’t think of two people living on a roundabout having been portrayed in film before.

3. Following recently-introduced legislation on squatting, the main theme is a hot topic.

4. Taps into the ideals of true freedom and wanting to go wherever you please, which always appeals to young people (and some free spirits of more advanced years).

5. Classic dynamic of the older, more experienced male being over protective of his naive-yet-feisty younger girlfriend, with a backdrop of constantly being on the run from strict parents and a disapproving society.

6. Looks at the lifestyle and often hazy principles of new age travellers without casting judgement (squatting, for example, is shown in neither a positive or negative light).

7. Harks refreshingly back to an age in recent memory before mobile technology and the internet came to dominate most (if not all) aspects of society.

8. Includes numerous references to events of the time, often worked into the more humorous moments of the script.

9. Features a small cast of characters, but covering a wide range on the ethic and social spectrums.

10. The inspiration behind this comes from a true story.