Unless historically relevant, I try not to reference fads, such as popular TV shows or public figures that may not be around or remembered in years to come.

Very little (if any) CGI is required to bring my works to life (Gadzooks! being a rare exception).

The works I write do not need big budgets in order to be produced. I’m well aware that a certain amount of risk is taken with first-time writers, so if something requires an astronomical cost for a non-guaranteed return then it isn’t going to happen.

If the above rule is to be followed then I avoid anything that requires an exotic location outside of the UK. Why fly first class to New York and apply for an expensive filming permit when you can get the bus to Barnsley and enjoy an inexpensive eccles cake, but still have just as much fun? Well, almost as much.

I attempt to use genuine humour, not lowest common denominator laughs of the kind that are vulgar, crude and crass. I also try and steer well clear of the so-called ‘comedy of embarrassment’. Surely even the most serious of works should contain a little humour to lighten the tone?

My works require small casts and don’t need a massive number of extras. Why?

Because, in the main, these are everyday situations that everyday people know and understand. I don’t write about major world events that cause mass protests across the globe or the coming of gigantic alien motherships to bring about the destruction of mankind.

Following on from the above, I write about what I know, which every manual says you’re supposed to do. It’s far easier to work a situation into your story if you’ve experienced it first-hand.

On the whole, these works have a down to Earth and British flavour to them – they are not written with Hollywood’s conveyor belt in mind. And at this point in my ‘career’, I think that’s a good thing. 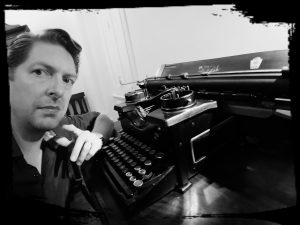 [James A. Gray forgetting that a bit of paper in his typewriter would go a long way.]